The financial crisis of 2008 was one of the most disastrous in modern history. But did any of you know that a few men of Wall Street saw it coming? This is what The Big Short is about and it is definitely one of the biggest surprises of the year, something that no one saw coming. With fantastic performances, witty dialogue and great information this is definitely one of the most innovative, brilliant movies of the year… from the guy who directed Anchorman!

With The Wolf of Wall Street only coming out 2 years ago many had seen enough of the debauchery that is associated with Wall Street. But The Big Short offers something that no other movie about a financial crisis movie has done before… it teaches us. The director and the actors don’t expect any of us regular people to understand the complexities of mortgage bonds, but that’s okay.

McKay constantly breaks the fourth wall, with Jared Vennett (Ryan Gosling) explaining most of these complex economical terms to members of the audience.

But in a stroke of genius we also get to hear from celebrities like Margot Robbie in a bubble bath, Selena Gomez playing poker and Anthony Bourdain chopping fish. All of them explain Wall Street in easy to understand metaphors.

Without a doubt, the script for The Big Short is one of the best of the year. With little effort and amazing gravitas, Adam McKay speaks through these real life characters and explains hard to understand concepts in the matter of seconds. If every economics class was this fun we’d have a lot of economists.

In the first ten minutes the movie covers a lot of ground and sometimes is a little confusing. The timeline jumps all over the place and it left me a little overwhelmed. But once they cut to Margot Robbie explaining CDO’s in a bathtub the movie found its footing and never looked back. Once she told the audience to f*ck off I was hooked.

Sometimes great dialogue can get butchered by awful actors. The Big Short had no such problem with one of the best ensembles of the year, every one of them putting in fantastic performances. Steve Carell seems like a sure thing in the Best Supporting Actor nominations at the Oscars. His performance was much better than his turn in last year’s Foxcatcher, which is saying something. This time Carell isn’t fantastic because of his change in the physical department. He really runs wild with this role and is completely bonkers (rightly so) in his portrayal of Mark Baum.

Ryan Gosling is very charismatic as Jared Vennett, the man who explains the mortgage market to the audience and the man who bet against the housing market and won big. It’s definitely Gosling’s best performance since 2011’s Drive. His character is a sort of anti-hero as he does accept a 47 million dollar check at the end of the film but tells the audience it’s okay to judge him because he’s an opportunist. You laugh with his character but there is some jealousy towards this man who made millions out of people’s misery.

Then there’s the fantastic Christian Bale, who is Michael Burry, the eccentric hedge fund manager with a glass eye. He saw the financial crisis of 2008 coming before anyone else and literally bet all of his investor’s money against it. Bale surprisingly perfectly fit this role and brought a freshness to Burry’s character. From the bare feet to the hilarious laugh of his, he brought an authenticity to the role of Michael Burry and (according to people who knew Burry) was almost exactly like the man himself.

Brad Pitt was also quite effective in his small role as Ben Rickert, a former banker, now organic gardener. Other notable performances were that of Jeremy Strong, Finn Witrock and a small but awesome cameo from Melissa Leo.

But while there are fantastic performances all around the board, this is Adam McKay’s movie and he should be praised highly for it. He wrote and directed this movie, producing his finest work yet. McKay took an American tragedy and perfectly mixed comedy, drama and out of this world tension and created the piece-de-resistance of his career.

The Big Short coaxes brilliant performances out of its cast with a impeccable script helping to lead the way to one of the finest movies of the year. It doesn’t bask in its own greatness, instead making sure people understand what happened so that hopefully it won’t ever happen again.

At the start of the credits it hinted that the American banks are re-starting to sell sh*t mortgage bonds again but under a different name. This movie is as much of a warning as it is comedy… there is a cost that comes with living the American dream and hopefully you’re not stupid enough to cross the lines where that cost comes into play. 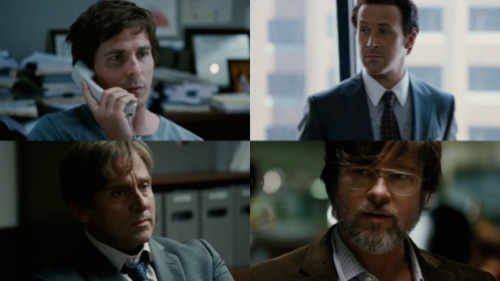 What did you think of The Big Short? Was it a refreshing, original experience for you? Let us know in the comments below…