Good westerns are a rare breed in Hollywood these days. Not since The Coen Brothers’ True Grit has there been a western that an audience can really jump into and enjoy. But last year Westerns were revived.

But a potential classic in the Western genre is the feature film debut from John Maclean, Slow West. A fantastic film, part Coen Brothers, part Wes Anderson, Slow West takes you on a beautiful journey that in the end leaves you feeling deflated and elated at the same time. A rarity in the world of film. Slow West features one of Michael Fassbender’s most authentic performances and Kodi Smit-McPhee is great as Jay Cavendish.

Slow West revolves around Jay Cavendish who’s travelling across America to find his one true love, Rose. Rose and her father (Game of Thrones’ Rory McCann) fled from Scotland because they were wanted for murder. Thus Jay Cavendish travels with the greatest of intentions, while unknowingly leading a group of bounty hunters straight to them. Step in Silas (Michael Fassbender) who offers to lead Jay safely through the Wild West for the sum of fifty dollars. And thus starts an adventure that at times feels like you’re walking right through a Western conceived from the mind of Woody Allen.

The story starts with Jay travelling alone by horse through the dusty wasteland we know as America. Flashbacks are placed carefully throughout the movie to point to his relationship with Rose and why he even left for America in the first place. The flashbacks are placed with perfect precision never taking away from the intricate storyline. Director and writer John Maclean doesn’t make the same mistake many first timers would and doesn’t take away from the main story… The relationship between Silas and Jay.

Slow West impresses with great visuals and intricate storytelling. First time director John Maclean presents a western that entertains you but at the same time poses the questions of morality in the Wild West.

Silas and Jay’s relationship is a complex one that the movie dives deeply into. It uses Fassbender and Smit-McPhee’s abilities to the full and the chemistry between the two is unmatched in any movie so far this year. They play off each other brilliantly, both sporting accents that would make Helen Mirren proud.

Some people say that a movie is only as good as its villain, and in many cases that would be true. But Slow West’s villain Payne (played by Ben Mendelsohn) does not stand out. Except for the few interesting scenes he shares with Fassbender there’s not much he’s used for. It really makes you ask the question; “Was there any need for him?” and if there was, what could he have done to made the movie better.

While he was presented as the main villain, it’s really a race between all the bounty hunters, blurring the lines between who’s good and who’s bad. As Silas says in the movie; “There is no good out here, only living and dying.”, Silas evidently puts himself under that category at the start of the movie. But as his journey with Jay progresses he starts to see things differently, realizing that there can be room for optimism, even in the Wild West.

In the end Slow West ends with a real Western cliché. A Mexican stand-off. But it’s different than most because it’s really a big game of who is who. All the bounty hunters are set on collecting their two thousand dollar reward. Thus chaos and a big, bloody battle ensues leaving everyone in shambles. John Maclean said he gained inspiration from movies like Dirty Harry and Reservoir Dogs for the staging of this final battle, cementing it as Western gold.

At the end of the movie the camera pans over all the people that had died since the start of Jay’s journey. In all the movies I’ve seen over the years I had never seen this before. It was brilliantly done, and it was great for this first time director to put his stamp on Slow West. John Maclean is a director that everyone should keep their eye on in the coming years. 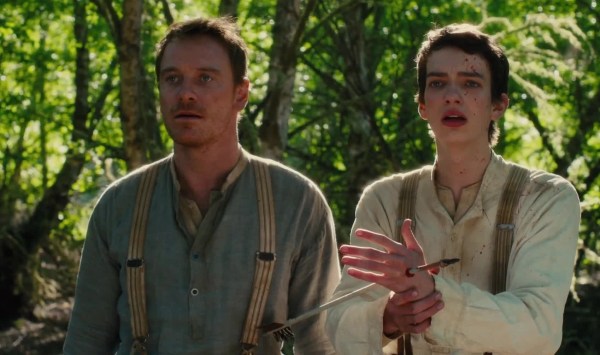 Humour was a big part of keeping the slow out of Slow West and there are some genuinely hilarious moments. Jay gets shot by an Indian and only because of his quick reactions does it not go straight through his head (The first almost head shot??). Instead it goes through his hand to which Silas quips; “Nice catch.” Also as the relationship between Silas and Jay builds from a work relationship to a friendship they have some great moments that smile. Especially when Jay uses his resourcefulness by creating a makeshift dryer for their clothes by attaching ropes between his and Silas’ horses. It’s moments like this that make you smile and root for these two explorers.

The thing that stood out most though was the original score composed by Jed Kurzel, brother of Macbeth director Justin Kurzel. It accompanied the movie perfectly making it more suspenseful and unique. First it sounded like the score of a Woody Allen movie, jumping along melodiously and joyfully, and then it shifted to suspenseful that would not be out of place in a Coen Brothers movie. It just makes the art of the movie stick out more and more, really highlighting how unique this Western really is.

Slow West might remind many of a Wes Anderson movie because of its artsy approach and melodious soundtrack accompanying the ensuing action. Or they might be reminded of a Coen Brothers movie because of it’s dark sense of humour and sometimes somber approach to the plot. But John Maclean has for sure added his own personal touch while at the same time blending these two brilliant, different approaches into a single movie making for an enjoyable and memorable ride.

While Slow West might not be everyone’s cup of tea it would be wise to give it a chance. It really surprises you with it’s dark humour and very “western” feel. It seizes the audience’s attention with it’s haunting musical score and pitch perfect performances by its cast. Slow West is anything but slow…

What did you think of Slow West? Let us know in the comments below…