Nick Serino is an up and coming actor from Thunder Bay who recently won a Canadian Screen Award (the Canadian Oscar’s equivalent) for his scene stealing turn in Sleeping Giant.

Nick was very kind to grant an interview. I sadly didn’t get to see Sleeping Giant at the Toronto International Film Festival but I righted this wrong by catching the movie which is in limited release now across North America. We sat down over Skype to talk about his first venture into the filmmaking world and the journey from short film to award winning feature. 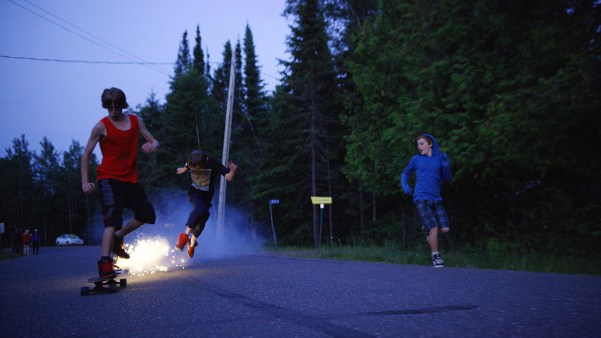 Welcome Nick, so how does it feel to be apart of a movie that’s so big right now?

Serino: It feels absolutely terrific. Especially in Canadian film, a lot of the smaller films don’t get recognized, so it goes to show that we did something right. We struck a chord in the industry and it’s really easy to relate to for audiences.

How did you come around to getting this part?

Serino: There’s this small theater in Thunder Bay (where he’s from) and my mom told me about an audition that she saw on Kijiji (an advertising site in Canada) that my sister told her about, because my sister wanted to audition for it. So I walked into the audition and everyone was reading a script and practicing and I just stood there because I had no clue what the movie was even about. When I went in they gave me a script for Adam (the lead role which was later given to Jackson Martin) and I got the part. Once I got my cousin a part and they saw our chemistry they asked if we wanted to be cousins in the film and be reckless and goof off. I thought it would be a fun role to play, more that I could get out of it and I ended up winning a couple awards for it so I made the right decision.

What were your thoughts going into this movie? Did you ever think it would be this successful?

No I didn’t. I just thought it was going to be a summer job, and a fun experience. When we started making the feature film after the buzz of the short film it started getting overwhelming and now we’re just overflowing with stuff.

What was it like going to Cannes for this movie? Many would say that’s the most prestigious film festival in the world so was that overwhelming?

It was crazy! As soon as we got there it was beautiful weather, so many people wanted to talk about the movie and we met some really nice people as well. We had good questions at the screenings, very good reactions all around, it was just one great thing after the other and it really helped gain experience and knowledge of the film industry.

And then later on in the year you visited the big Canadian film festival, the Toronto International Film Festival, where the movie screened twice. What was that like?

Just seeing the movie at this huge theater with a red carpet and a huge turnout was kind of surreal. It was a completely different experience and something I’ve never felt before. That was the first time that I thought that this (acting) was something I wanted to do for the rest of my life.

And then the brain behind this movie, Andrew Cividino has received a lot of praise for writing and directing this movie. What can you say about him?

Yeah he was fantastic and brought a great energy to the set. Whenever you didn’t feel comfortable doing something he would talk you through it and he would always find a way to make it work. He was full of good knowledge when it came to movies and he taught me more than school has ever taught me.

What was it like being nominated and then winning a Canadian Screen Award (Canada’s Oscar equivalent)?

It was absolutely unbelievable. I had practiced with my publicist and agent in case I won but I didn’t have a speech prepared. When they called my name and I went completely numb and was speechless. It was probably one of the best moments of my life and it was great that my speech went well and I even got a few laughs so that was great.

Did you rub noses with anyone famous at the Canadian Screen Awards?

I actually met Martin Short! After I had won he came to my seat and congratulated me on a great performance which was really cool of him to do. That was probably one of the highlights of the night besides winning.

So what future projects do you have upcoming that you can tease us about?

Well I have a short that’s about to play at some festivals. I shot it right after Sleeping Giant and it’s called Boys Will Be and we’re hoping that it does well so we can shoot a feature movie for this short as well.

Sleeping Giant is out now in theaters and will be released on DVD and VOD later this summer by D Films. Make sure to check out our podcast review coming soon…