High-Rise is the typical Ben Wheatley movie. It’s super violent, really funny and its premise challenges the audience to actually think while watching it, which is a big plus in my mind. But the big difference with High-Rise is that Wheatley has been given a bigger budget and an amazing cast of well known actors to work with. This not only allows him to further his vision of this dystopian novel but also dive deeper into that maniacal brain of his.  A Field in England (also directed by Ben Wheatley) was one of my favourite movies of 2013 and blew my mind with it’s ingenuity and gritty look at the English Civil War. High-Rise one ups that and is not only Wheatley’s most twisted movie yet but also his best.

He befriends a documentary film maker, Richard Wilder (Luke Evans), who’s relegated to the second floor and hellbent on showcasing the injustices happening in this luxury community. With this one decision Wilder starts a war between the different classes of the high rise, a tribal war.

While High-Rise has been advertised as Tom Hiddleston’s movie, Luke Evans shines the brightest as Wilder. His performance is very layered as we get to see many different sides of Wilder and the raw emotion we get to see from Evans makes this one of his best performances to date.

Sienna Miller impresses as well as Laing’s love interest bringing a certain joy to a otherwise horrifyingly violent satire.Her character has a few surprises up her sleeve and in many ways helps set up the climax of the movie. Jeremy Irons is convincing as the ignorant Mr. Royal, who in Pontius Pilate type fashion decides to wash his hands of any responsibility and let the problem solve itself.

Tom Hiddleston is his usual self, excelling in his role as Robert and really shines next to Mrs. Wilder (Elisabeth Moss). With The Night Manager and I Saw the Light being his other 2016 projects Hiddleston is having one hell of a year. 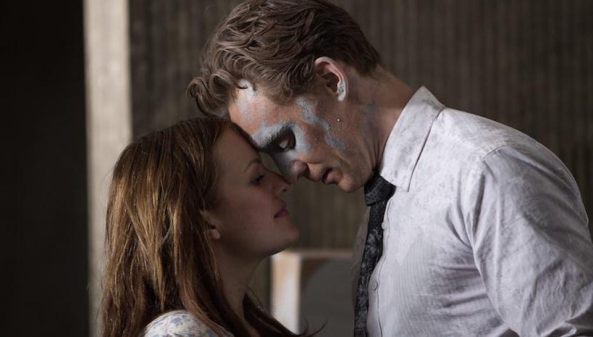 High-Rise is an incredibly funny look at the huge gap between the lower class and the higher class and somehow becomes relevant to our current situation across the world, specifically in Britain. What makes it even more funny is that the world is going on as per usual as chaos and violence erupts in this high rise. Wheatley presents this fact rather comically reminding me of that scene in Sightseers when the protagonist kills someone for littering. While the movie is shocking it’s just audacious to think that everything is going normally in the outside world.

High-Rise has been in development hell for years. Many filmmakers had tried for years to adapt it (Cronenberg being the first choice thanks to his great adaptation of J.G. Ballard’s Crash) but finally in Wheatley we’ve found someone who can do the book justice. Also Wheatley decision to keep with the 1970’s time period as it was in the book was absolutely splendid because it still relates to society today even more so than a futuristic setting would have.

While thoroughly enjoyable High-Rise isn’t without its flaws. In my mind it missed some great opportunities to add more comedy but instead added seemingly useless scenes of violence (they’re not if you really dive into the psyche of the movie). A lot of people will be strongly against its dark comedy and over the top violence. Others will love it for its sadistic humor,and artistic approach. But if one thing is true, it’s that High-Rise is without a doubt one of the boldest films in the last decade and a truly riveting cinematic experience. For all film fans out there it would be wise to book a 120 minute block out your schedule for this brilliant feat by a visionary of our time.

What are your thoughts on High-Rise? Let us know in the comments below…